Anyone who's been reading recently will know that I've been having a hard time with my current WIP. The character voices have been a bit off, the ending was going to run to fifteen volumes, the conflict kept sliding under the table and my laptop is waging a personal vendetta against it. Anyway, I forced myself to just get on with it and write last night, and it's coming... I know it is, because the characters are slowly introducing their own little quirks, and that makes me pleased. So, pleased that I started feeling settled, and then wallop, suddenly I have an idea for something completely unrelated. It's just sitting there, the faintest smidgen of a concept, but there's something compelling about it.

Now, I know that my editor is interested in novellas at the moment, so I mentally pencil it down as a novella idea, and get back to work on DM. After all, it's nothing concrete yet, just a little seedling that I need to mull and nuture for a while, but I know that something magic is coming.

I'm still mulling at lunchtime today when I nip upstairs to print something out, and I write two words in my notebook as a vague remind of the idea, when something weird happens. Leastways it's weird for me. The outline of a novel just spills onto the page, and it's only got one smidgen of a thing in common with the previous night's idea... They are both about VAUGHAN (cue maniacal laughter). I blame the visit to Stokesay, last month. The place just had a resonance.

The thing I find strange about all this is that the most frequent question I've been asked about writing is - when are you writing a sequel to A Gentleman's Wager? And I've always been pretty negative about the idea. I never felt it was an avenue I needed to explore. I knew what happened to the characters in the short term, and in the long term I suspected that what I'd write wouldn't be what people wanted to read. But, and don't anybody hold their breath. I think I've finally got it. Of course, I still have to fill in the details and write it, but I'm actually tingling in anticipation. Don't worry anyone who knows me, I'm sure the excitement will wear off. Still, watch this space...

Oh, and here's the place that's inspired all this magic. 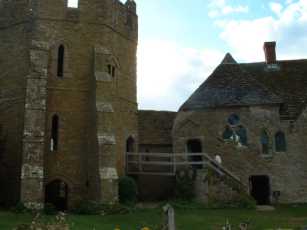 Posted by Madelynne Ellis at 8:41 pm No comments:

Rats and other horror stories

Least ways the appendix is fine. I'm now just loaded with cold, which is probably courtesy of the hospital, or perhaps the school yard sniffle...urgh! Now the thing is when I'm ill I have this strange urge to clean things, as if cleaning the cooker will somehow eradicate whatever nasty bug is afflicting me. Hence during the appendix drama, I, in my infinite wisdom, decided to mow the lawn. Now, let me say the grass had got pretty long, as we'd been away over the summer and then we've had loads of rain. So, there I am happily mowing away, having removed all the kiddies toys from the lawn first, when crunch... And I think, oh bugger I've just mowed a toy, but no, it's actually much worse. I've have infact mowed a very dead, decaying, maggot infested, nausea-inducing rat. I'm not squeamish. I have a biology degree, but this was the most repulsive thing I've ever had to deal with. Worse that vomitting children, digging up sewer pipes, handling live cockroaches, and hacking the earbones out of year-old dead fish, and to make matters worse, my 4yr old son, in typical little boy fashion is going 'WOW, LET ME SEE! LET ME SEE!' Grim, grim, and more grim. Anyway, just thought I'd share that with you all before I return to my regular horror story, namely Desperate Measures.

I decided that the original ending I had planned just wasn't going to work. It seemed very tacked on, and would have taken me to double the actual word count BL require, so I've ripped it off and come up with a brand new ending, which I hope won't come across as too abrupt... sigh. I've also incorporated a nice new twist, and discovered that things are destined to be a bit edgy. Hopefully, not too edgy for BL's current romantic fluffy feel. Although, I think I may have a HEA. I've also, OMG, and this is a first for me, written a detailed working synopsis. How amazing is that? Suddenly, actually writing the various chunks seems a lot less stressful.

On the Seckrit Project front... well, it's still sitting on my hard drive. I just don't seem to be able to get anything out of the door at the moment. I'm blaming illness. Although I have also been waiting for some feedback from my 'crit partner'. Who said it was very angsty and accused me of being a big meanie, but I say, it's yaoi, what do you expect <cue very evil laugh>. She did say it was very hot too. I still need an artist to make it really saleable though.

Other stuff... oh, yeah, still nada on the Sex with Strangers, and Bondage tales front. Must get on with those. Too many deadlines, too little time...

Just a quick note to say I'm much improved and thanks for all the well wishes. It's always nice to know people are thinking of you when you're feeling low.
Posted by Madelynne Ellis at 1:44 pm No comments:

Sorry if it's a bit quiet around here for a while, I've just got out of hospital. My appendix is playing up...
Posted by Madelynne Ellis at 7:19 pm 5 comments:

Anyone know any super cool yaoi manga artists? I could really use one right now. Ability to draw extremely pretty men with long flowing locks essential.
Posted by Madelynne Ellis at 7:30 pm 1 comment: