You're an intellectual, and you've worked hard to get where you are now. You're a strong believer in education, and you think many of the world's problems could be solved if people were more informed and more rational. You have no tolerance for sloppy or lazy thinking. It frustrates you when people who are ignorant or dishonest rise to positions of power. You believe that people can make a difference in the world, and you're determined to try. 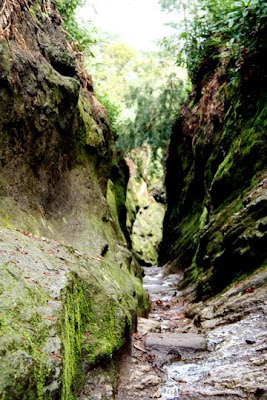 I've been out and about the last two days enjoying some of the beautiful Shropshire countryside. Yesterday, we visited the ruins of what was once the fourth largest Roman city in England. Most of what remains is the bathhouse. Seriously you wouldn't believe the size of the place. More like Olympic swimming pool and associated sports complex than a bathhouse! Today, we took in the beautiful woodlands of Hawkstone Park with it's many follies. It was a lovely place and the drizzly weather didn't dampen our spirits, although it would have been nice to see the landscape from the top of the monument. Apparently you can see three counties on a good day. I could barely see three feet in front of me as we emerged from the top of the very high tower into a cloud.

I think another highlight of the day had to be the system of caves - bringing a torch is recommended, likewise for getting through the various other tunnels.

Interestingly Hawkstone Park was Britain's first tourist park. It first opened during 18th century when the estate was owned by the Hill family. I can't imagine many ladies trekking around that route in their big dresses. It must have played havoc with their hems!

Anyway, I'm home now, and shattered, but I still ought to apply myself to writing (we'll see).

I would like to point out another two recent reviews. These for A Gentleman's Wager. You can read them at RRTerotic and cataromance.

Here's a snippet from the latter review:

Black Lace have accepted the better of my two vampire stories I subbed for the Lust at First Bite anthology. Yay! I'm really pleased, because I love that story. El Alquimista is another of my imagination running wild tales. I guess it has a fair amount in common with Broken Angel, though they're not set in the same world. Anyway, it should be due out around November time.

I would post a vampire pretty to look at, but alas it would be misleading, since the vampire of my story is a pretty unusual looking guy.

What, you want a pic anyway?

Ah, go on then. Suppose it brightens the place up. 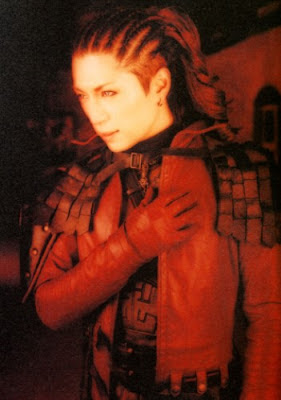 --
Recently watched: CSI
Currently listening to: Malice Mizer
Currently reading: Return to Me by Julia Templeton.
Posted by Madelynne Ellis at 10:08 am 5 comments:

I’m helping to spread the word about the newly redesigned website Sensual. If you like your romance novels on the steamy side, you’ll love this site. It’s full of reviews, interviews, excerpts, information on the newest print and ebooks and lots more. You can even win books and other goodies. So check it out. http://sensual.ecataromance.com
Authors, you can spread the word too! If you’d like a chance to win one of 20 Cover Ads and get a shot at a fabulous grand prize (a 3 Pack of their huge billboard ads - a $100 value!) just repost this blurb on your blog or website. Then stop by Sensual and leave a link to your post. All authors are eligible to enter and win so why in the world wouldn’t you? See their site for more information and official rules: sensual.ecataromance.com/?p=688

I’ll see you at Sensual!

Posted by Madelynne Ellis at 11:22 am No comments: One day I'll write a book that involves two characters falling in love with each other and that's it. Fortuna is not that book. Everything is hopelessly complicated and there are rather a lot of characters even by my standards. Nothing is simple. One reviewer recently remarked that my books read like regency soap operas, and I can see what prompted that opinion - everyone has their own agenda.

Anyway, this isn't really about Fortuna, which has the reached the point where I think it's complete and utter carp. This is about a nice bit of spooky fun.

Despite the numerous projects I have sitting awaiting my attention, I've decided that the next thing I write is going to be purely for my entertainment. I'm not going to write it with a view to publication, but to amuse myself, and remind myself why I love writing.

It's about two men spending the night together in a haunted building as a dare, and probably involves a hell of a lot of m/m sex (leastways as much as you can reasonably squeeze into something intended as a 20K novella).

--
Recently watched: BSG Season 2 finale
Currently listening to: Cast
Currently reading: I'm STILL waiting for something to hook me! Haven't had much luck with the ol' book choices recently. I want something that drags me into its world and the lives of the characters, takes me on an emotional rollercoaster and leaves me gasping for more. Recommendations welcome. NB: I'm very difficult to please.
Posted by Madelynne Ellis at 10:20 am 3 comments:

Yay! I've just received another review for Phantasmagoria, this one from RRTerotic.com, who have awarded it with their La Grande Morte label ie a perfect 10.

Here's what the reviewer, Kate Garrabrant has to say:

Bella Rushdale lives a decadent lifestyle with her two lovers, the Viscount Lucerne Marlinscar and Vaughan, the Marquis of Pennerley. All three have been lovers for over three years, and they throw caution to the wind, enjoying ferocious lovemaking every chance they can get. Lucerne is the more considerate of the two men. He treats Bella like precious gold, whereas Vaughan is the brooding type and likes it rough. Bella could not ask for anything more. But that is all about to change when Vaughan simply walks away from them both without any reason.

The trio's scandalous relationship has long since gone past the point of everything that is considered to be normal in the eyes of society. Lucerne wants Bella to be his wife but lusts after Vaughan with a passion no man should feel for another. Vaughan is obsessed with Lucerne, the only person he truly loves; even so, he can’t let go of Bella. Bella is caught between the two men, she adores Lucerne, but her soul belongs to Vaughan. She can’t let him go and will chase him to the pits of hell to get him back even if that means sacrificing her relationship with Lucerne in the process.

Weeks go by and neither Bella nor Lucerne knows where Vaughan has gone. Vaughan is tired of the way things are between his lovers and sets a plan into motion where Bella and Lucerne must choose whom they want to be with. He invites them to his family home at Pennerley where he will hold an All Hallows Eve party called a Phantasmagoria. There his guests will experience their darkest fears and desires. He hopes Lucerne will come rushing to him and proclaim his love and, of course, Bella will be right behind him. But Lucerne makes no appearance, only Bella arrives. She’s willing to do anything to make Vaughan love her, even if it means degrading herself.

PHANTASMAGORIA pushes the envelope in so many ways. Madelynne Ellis has written a dark gothic tale where sexual perversions are out in the open and lust and sex is all about power. This may sound like an uncomfortable read, which it may be to some, but I was enthralled and lost in this tale of three people who live for vice but truly do not know what they want or even if they can love one another.

Vaughan may seem to be the villain of the piece, but he is so tortured because his love for Lucerne will never be reciprocated. He knows he can have Bella eating out of the palm of his hand, but he wants what he can’t have, and because of that, he almost ruins himself in the process. Bella is the one woman who understands Vaughan and sacrifices herself. She is willing to do whatever she can to make Vaughan happy just so he will give her a piece of his heart. Seems cruel right? But when you figure out what Vaughan is trying to accomplish, his so-called revenge comes together like pieces in a puzzle. Almost every page is filled with talks of sex and the actual sex acts seem a bit depraved in a way. One such scene where Vaughan enjoys Bella in the kitchen pantry should raise some eyebrows. And when the time for the Phantasmagoria comes, well, everything before is really child’s play.

Thanks to the Diva's live whipping challenges I finished writing Fortuna last night. Okay, so it's not completely finished, there's still plenty of work to be done on it, but the main struggle is over. Next step is the paper edits as I find it much easier to spot inconsistencies etc on paper.
Posted by Madelynne Ellis at 10:28 am 4 comments: