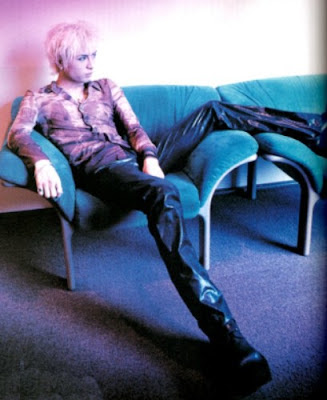 Yay! Yippee! Finally people seem to be reading (and enjoying, I might add) Dark Designs. (Check it out here and here.) You would not believe how all kinds of happy that makes me. Seriously, I have a weird love/hate relationship with Dark Designs. Content wise, I love it. I adore Takeshi. Hell, actually I love all the characters. That book is so very me. It's a crazy extrapolation of all the real life quirkiness I've encountered. The trouble is, it's saddled with THE most hideous cover in creation. I don't know what the art department were on that day, but seriously, they should avoid it in future. It's so utterly crappy, that just thinking about it still makes me cringe and my blood boil two years later. But hey, I've had the cover rant before.

You know what else I appreciate? That someone appreciates the inclusion of this little gem... "Omae wa ore no mono desu"... "Kore kara zutto... itsumademo." I spent hours agonizing over the inclusion of those lines. Should I have translated them? I decided not to, figuring the yaoi fans out there would probably understand, and everyone else could guess along with Silk as to what Takeshi had said to him. He meant it, whatever it was <very evil grin>.

Anyway, on to other stuff. Pure Folly remains just that. They had finally got around to kissing, inspired I might add by this pair found via Madam Butterflies blog, but are now having a rather tense debate. Jude doesn't get why Alastair has a problem with him marrying his cousin for self-preservation reasons! Alastair is trying not to feel heartbroken over the fact that he's already losing what he thought he just gained. Bet that makes no sense whatsoever.

On the subject of yon kissing pair in that clip. It's weird. You have to watch it with the sound for it to work it's magic! Sound off, it's just two guys kissing. Sound on, and it does seriously weird things to my insides. So, I figure I now need to work out how to incorporate more sounds into my writing. No easy task, I can tell ya.

Off to do some work before I tackle the Sunday ironing mountain.

I'm debating getting Kit out of the closet again!

As you know, I loved Dark Designs. I've read it three times because I can't get enough of Takeshi! I don't mind the cover. The woman makes me think of Remy well enough and it caught my eye on the shelf of Barnes and Noble amidst a million romance novels around it.

As far as that line in Japanese, can you PLEASE tell me what it said? I've wondered about that! Thanks! (Thanks also for posting a delicious picture of Gackt.)

I'll email you a translation, Sedonia. I think you'll like it :-)

I hope you can capture that. It's very nice.

By the way, Omae is normally, or at least is was when I lived in Japan, kind of derogatory term for a man to call a woman, even though every husband does so to his wife. Anatta is a more respectful term, even though to us, it's still kind of weird to call your lover "you".

However, because of it's common and familiar use between couples, I find it to be a rather affectionate term and liked to be called that. Like I was being treated as acceptable in "their" world. So, it was really nice to read Takeshi saying that to Silk.

Eek - the complexities of language! I'm so relieved it made sense in context. My Japanese is limited to a few words. You'd think I'd know more considering the amount of time I waste watching Japanese TV clips on YouTube.

Not sure I've managed to capture the essence of the kissing, but I think what I have is nice :-) Oh, and all raw and affectionate at the same time. It's a bit of a moment.

Oh yeah, forgot to mention the clip. I watched with sounds and wow, it gave me brain fever and fever all over the place!!

I feel so mystified as to why it has this effect on me, but it does!

Oooh, I want the translations too!! :)

You know, I don't mind the DD cover. I don't really think the models fit the book, but I do love the fact that it's bold and red and easy to remember. It's certainly unique, and not in a bad way. A cool manga-esque cover would have been more fun though. Too bad publishers never ask for author or fan input on covers.

I saw DD sitting on my shelf last night and was tempted to pick it up for a re-read. And I *never* do that!

DD is fantastic. :) I've read it so many times now and I still adore all the characters. Sorry I know this is an old post of yours but I wanted to chime in and leave some praise! Remy, Silk and Takeshi are fantastic together.

As for the cover, I didn't mind it personally but I can see where you'd be very bothered by it. Maybe on a reprint they could redo the cover?

Much love for your writing. :)

Thanks for dropping by, Jophiel. I appreciate it :)