In just a few more hours... 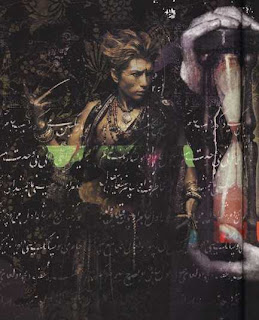 Half-term will be over and the house will be peaceful again. I'll be able to write. I won't spend the whole day picking up things other people have left in random places around the house. I'll not have anyone constantly shadowing me complaining that they're hungry, and most importantly, I might actually be able to write for longer than five minutes.

I'd love to report loads of progress on my numerous projects, but aside from a bit of research into the origins of the Djinn and Evie having her nails done nothing much has happened. You can probably blame Kit for that. He's waltzed off somewhere and forgot to leave a forwarding address. Thing is, I'm not even sure if he has waltzed off, or if he's just cozied up next to the Aga in his farmhouse trying to persuade himself that he's not Lucifer incarnate, which of course, he's not. Stupid bugger!

We don't have half-term here TG, but the little darlings do get 10 weeks off in the summer (shriek!!)
Hopefully you'll get some writing done at last!

Not looking hopeful on the writing front as one of the little beasties now has some vile sickness bug and keeps throwing up.

Not to be TOO depressing or anything (bwhahaha), but you'd think their time off from school would get easier as they get older, right? Nuh-uh, they just take up MORE space and have even LARGER appetites.

Seriously, at one point over this past Christmas break, I screeched at my two sons (22 and now 13) in a totally exasperated voice, "Could you two PLEASE stop eating for 5 minutes!" Geez, it would be a bit different if THEY made a grocery run every now and then!

Of course the near constant smell of the hair straighteners and various hair products that seems to constantly permeate the house (OY! The COST of those products) when the two girls are around (22 and 16) is only marginally better than the boys bottomless stomachs.

And when all four of them are off school, there are bodies draped everywhere in front of every available TV and/or computer PLUS their friends are scattered throughout the house too.

So, in conclusion, be glad yours are still young enough that YOU are in control. Or at least you APPEAR to be. ;-p

I saw the pilot of "Being Human"--it was really cool.

Bev, I'm convinced that by the time he's 15 I'll no longer be able to afford to feed my son. What is it with boys and their bottomless stomachs?

Victoria - Being Human is really cool. I love its humour. The last episode had a couple of absolutely killer lines.