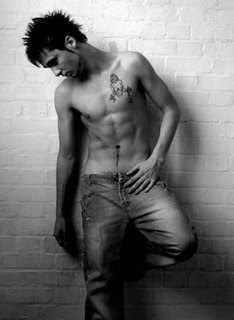 I've hit a point in the Dreaded Contemporary where I can't seem to get it right. I swear, I must have written this scene ten times over by now. It's been in and out of the book, moved to different places, dismissed, reinstated and IT IS STILL NOT RIGHT! Although, I think each successive attempt brings it a little closer to how it should be.

It's pissing me off, I can tell ya. The thing is, while I quite like the DC, I don't want to spend the next six months working on it. I'd much rather it was only the next six weeks. Then I'd like to set it aside and attack something else while DC marinades on a shelf ready for edits. If only I could get this scene finished. Grrrrrrrrrrrr.

And just to make this stumbling block a little bit harder, I've contest judging to contend with and the Romance Divas mentor program officially started today! Oh, and my knee still hurts! (Stupid knee! Kills knee.) All I need now is for Vaughan to show up and start demanding attention. (Hm, I shall have to waylay him with cunning distractions :-))

So, back to the DC... (Stop farting about, Kit, and get on with the smexing, will you. Then I can write the nice big drum roll scene in the next chapter.)

Sometimes I hate the figments of my imagination.

Whose story is this- yours or Kit's?

Who wants this scene- you or Kit?

Who wants this story finished NOW- you or Kit?

Feel free to ignore me. I only brought those up because LKH's husband, Jon, asked similar questions when she was having a similar problem with a climactic Merry Gentry scene. IIRC, in her case, every answer was "Merry's, dammit". I always thought that conversation was interesting and kind of funny.

Oh, and "All I need now is for Vaughan to show up and start demanding attention." is a bad thing WHY? ;-p

Although, really, I've been keeping him quite busy over on the DIK Ladies blog. He was last seen wandering off to show Samantha Kane who REALLY seduced Rhys (from Merry Gentry) out of her hut. hahaha

Whose story is this- yours or Kit's?

Who wants this scene- you or Kit?

Who wants this story finished NOW- you or Kit?

Um, actually that'd be me. Kit's in no bloody hurry. Poor boy is still running... Ha ha ha, but he can't hide forever. I will lay his soul bare upon the page :-p

Oh, and "All I need now is for Vaughan to show up and start demanding attention." is a bad thing WHY? ;-p

Is bad because he takes over, and I need to keep Kit pinned down right now (and no, Vaughan can't help cause he's not in this book.) Also, if Vaughan turns up, then I'm going to have to deal with him and Darleston too. Individually they're bad enough... together, I'm not sure my sanity can stand it.

I think NO man or woman on the island is safe from Vaughan.

At least it will keep him busy and out of your head for a bit. ;-D