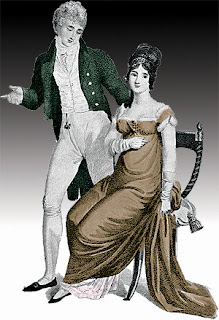 Affection for a price—Paris Ashcroft supports himself by offering discreet sexual liaisons to women whose husbands neglect their duties. However, when the one woman he’s lost his heart to asks for his attention he doesn’t suspect she’ll ask him to enjoy her husbands dark desires as well.

Was he following? Dear Lord, yes. Yes, he was. Just exactly as she’d prayed.

Sophia slowed her pace as she neared the top of the grand stairs. She didn’t want to lose him in the web of corridors that comprised Rievaulx House’s upper floor, but neither did she want to draw attention to their arrangement. The fact she’d been assured of Paris Ashcroft’s discretion was the predominant factor in her choice. There were plenty of young men she could have enticed to her bed tonight; one or two had even made gloriously lewd proposals, but no other that she could trust to keep silent over the tryst. Paris kept himself to himself. He was no greenhorn youth set upon fashioning a tawdry reputation. Rather he was a man and one with magic fingers and heavenly lips if the tales that were told were at all true.

She closed her eyes on his approach, and remained steadfastly faced in the opposite direction. First his scent—woody with a hint of juniper—then his presence washed over her, awakening the first stirrings of lust deep in her womb.

He drew level with her upon the landing, falling neatly into step beside her.

This was it, the moment in which she had to cling on to her conviction and settle all the worms of doubt burrowing in her stomach.

“May I offer you my arm, Mrs Lovich?”

She turned her head to look at him. He was sparsely built, wiry and tall, with a profile that might very well have graced his ancient namesake, for he wore his hair short, embellished with neither powder, wig nor queue, but curled softly about his ears. “Why yes, that would be most kind.”

Hark at them, and the ruse of decorum. Would the deception fool anyone? Perhaps it was well there was no one around to see.

Steady, strong muscles ran beneath her fingertips when she rested her arm along his. She sensed vitality and excitement, the later giving her cause to smile. In all of her planning, she’d never anticipated anything beyond a remote sort of detachment from him. After all, this was not for his pleasure, but hers and he must have conducted such business with many, many women.

Her smile stretched a little further. No—tonight was not quite the same. None of those other women had been entirely like her. None of them had possessed husbands quite so tolerant or devoted, with whom they shared secrets and desires. Not that he granted all of her wishes, but on this occasion… well, they’d discovered a passion they truly shared.

The thought of what they had planned raised another set of flutters in her belly. She risked a quick glance at her companion, and found he was looking at her with his soft dove-grey eyes. She’s never known a man with such appealing jet-black eyelashes or with lips so sensual that even when they were thinned and stern they still invited kisses.

Dear Lord, was it even fair to treat him like this. Oughtn’t she to lay it all out before him now, and explain just exactly what it was she wanted? Except, what would she say? Paris, you must know that it is the anniversary of my marriage tonight, and because Alexander and I wanted to make it something special we’ve invited you to our bed?

No—he might not take kindly to that at all. Would likely think he was being played, or would object outright to the notion of Alexander’s presence. If they’d been closer then it might have been easier. Then Alexander might have approached him, said; “Mr Ashcroft, I’d like to invite you to share my wife.” Except that in itself would have been somewhat misleading. Really he would have to have said, “Mr Ashcroft my wife and I would dearly like to share you, if you don’t find that very notion abhorrent.”

“This one is yours, I think.” Paris stopped her directly before her bedchamber door. “Are you all right, Mrs Lovich? You seem troubled.”

Sophia summoned a smile. “I’m fine, quite fine. I thank you.” She reached out and released the latch, paused on the threshold to look back at him over her shoulder. Those dark eyes of his fascinated; captivated her so that she remained frozen.

“You do understand what happens if you invite me in?”

She ought really to enlighten him.