Because I want to wish you all good luck for the coming year, here's a simple way to make your own lucky christmas pig. 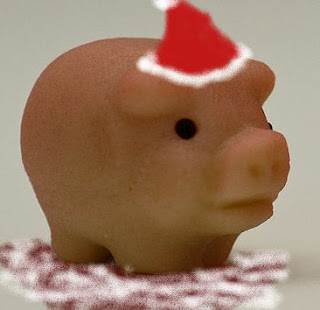 1. Split the block of marzipan into two larger balls and one smaller ball.

2. Take the two large balls of marzipan and make a well in the top of each. Add a few drops of red food colouring. Then knead the marzipan until the colour is uniform throughout and hopefully pink.

3. Use one of the larger balls as the pigs body.

4. Roll the other larger ball into a long sausage shape. Cut into six pieces (4 legs and 1 snout, plus one spare)

5. Stick legs and snout onto the body.

6. Use the fifth piece to form 2 triangular ears, eyes and a tail.

8. Form the red part into a cone shaped santa hat.

9. Use the white(ish) part to make a trim around the base of the hat and a pom pom on the tip.

10. Using a cocktail stick or fork put two indents in the nose to form nostrils and add indents to the eyes.

Voila. Your own Christmas Piggy standing in a snow covered muddy field. (Should you want a spring piggy instead, use green food colouring to dye the coconut before applying to the chocolate biscuit.)
Posted by Madelynne Ellis at 7:00 am