It feels like aeons since I last paid my poor blog any attentions. Hopefully, this post will bring things up to speed on what's been going on in Madworld over the last month or so, and allow me to get back into the swing of things.

First up, the reason for my absence. I moved house! OMG, the trauma, the back breaking labour involved, and that was allowing for the removal men doing most of the work. I can't fault their efforts. They might have looked like two ordinary guys with not much muscle between them, but whoa... I can't believe how much heavy furniture and boxes they moved without so much as breaking a sweat.

I'm now mostly settled in my new study at the new house, but I'm also still surround by boxes. I've a feeling it's going to be like this for a while.

Okay, move completed. I took my driving test on Tuesday. And passed first time! Yay! I don't know what driving tests are like in other countries, but in the UK they're damn hard work. I'm so relieved to not have to do it again.

While the above has been going on, I've also had my typical writing workload to contend with too. Ai Press have acquired both Indiscretions and Three Times the Scandal(formerly known as Fortuna). The digital version of the latter will be released during April. There's more information about Three Times the Scandal here. A print release will follow later in the year.

Here's a look at the lovely cover. I love how it fits with the look of the previous books. 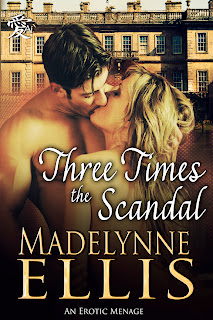 I'm so pleased this book is finally going to be available and I can finally share this offshoot of the world I first created in A Gentleman's Wager. I hope people are going to share my love of both Giles Dovecote and his rakehell friends the Darleston twins.

Speaking of Darleston, he's still giving me a headache as I finish of his book. I've about another 20K to write, but the proposal is already with my agent.
Posted by Madelynne Ellis at 6:17 pm 4 comments:


Pure Folly placed third! See, I even have a pretty banner to prove it.

In other news - I am still here. Things have been a little quiet writing wise as I've recently moved house. I'm now the proud owner of a brand new office --full of unpacked boxes-- but it's still an office. I'm also busy with edits for Fortuna, which is going to have a new title soon, and trying to get Darleston's book off to my agent. There are also a couple of new ideas simmering away too.
Posted by Madelynne Ellis at 10:58 pm 1 comment: