See the giveaway details
at Goodreads.


Posted by Madelynne Ellis at 9:06 pm No comments: 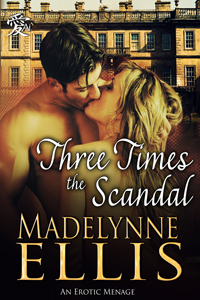 I love it when I receive books, and there's something particularly magical about receiving books in which my writing appears. Tuesday morning marked the arrival of a big package (poor delivery guy was staggering under the weight) containing print copies of Three Times the Scandal. I'm really pleased with how it's come out. The cover is all shiny and the paper inside is a lovely and thick. I think a little competition to give away a copy or two might be in order to celebrate (announcements on that one later, when I've had time to do some planning). 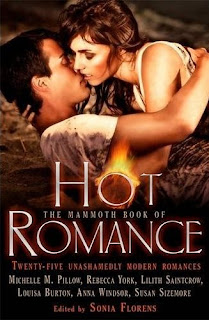 The second delivery arrived yesterday. Much smaller, alas, but I'm no less thrilled with the final product. The Mammoth Book of Hot Romance is 25 tales from some fabulous writers. I'm quite awed to be among them. I'm also particularly fond of melancholy old We Were Lovers Once, so I'm rather giddy over seeing it in print. It's out in the UK the day before my birthday on July 21st, but doesn't release in the US until August 23rd.
Posted by Madelynne Ellis at 12:35 pm No comments:

Now in Trade Paperback too 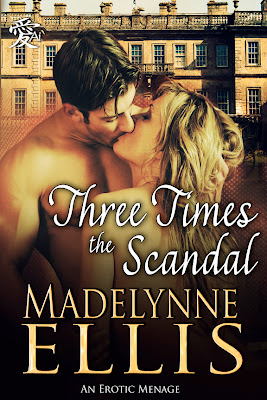 Three Times the Scandal is now available in trade paperback format for those who find digital reading difficult. You can grab your copy from Amazon, by following the link here.
Posted by Madelynne Ellis at 2:35 pm No comments:

There I was thinking I'll never get any reviews for Three Times the Scandal when two appeared in my inbox together.

The first is from Coffee Time Romance... 4 Cups

The second review is from Night Owl Reviews, who gave it 4.25 Stars and said...

I really liked the development of Giles and Fortuna's relationship. Fortuna knows what she wants and isn't a retiring insipid flower.

And you can read the whole of that review here.

Darleston's book is done. It's finished. I can move onto something else (eek!) after months of sweat and toil. Do I love it? Absolutely. Is it the book I thought I'd write when I set out to explore Darleston's character? Maybe not entirely. Do I know all about him now? Erm, I know a lot more than I did, but certainly not everything. I think he may demand a second book at some point dealing with a few issues that are inevitably going to arise and that have only been dealt with in the short term by the end of the book.

Right now, beta readers, crit partner and then off to my agent.

Emma’s gaze strayed to the mantle-clock. From the direction of the dinning room, the scrape of chairs being pushed back preceded the sounds of heavy footsteps. The gentlemen, headed by Mr Hill, squeezed through the parlour door two abreast and availed themselves of various chairs. Seven of them in total were soon draped over the furniture, chattering loudly. Amelia made a beeline towards Mr Bathhouse. Emma made to follow only to be intercepted by her father and Lord Darleston.

Ada came up behind them bearing a second teapot. “I thought you might be needing some more, miss, with so large a party.”

“Could you, dear?” Mr Hill gestured towards the steaming vessel.

For a moment, she thought it maybe only his outfit that engaged her senses. Then his hand shot out and steadied the wobbling cup and he blessed her with a smile that made the very corners of his eyes crinkle. Light flared in the depths of his pupils, like the moon spilling out from behind a storm cloud. He had grey eyes, flecked with specks of lilac that were like slivers of rain-washed slate.

The one look told her everything she ever needed to know about Lord Darleston. He was handsome and dangerous, and if she had any sense of self-preservation she would avoid him else those fanciful ideas she’d been entertaining earlier might very well get the better of her.

“Emma, my eldest.” Her father introduced her. “It’s so good to have you home again, dear. I do wish you and Langley would reconsider my offer. The old place is so cavernous with only Amelia and I in residence. Where is Langley, do you know? I do so want to speak with him before I retire.”

“I’m afraid I don’t know father. I thought he was with you. Perhaps he’ll be back in a moment.”

“Well yes, I expect you’re right. But, I think I may just slip along right now.” He turned to Darleston and cuffed him companionably upon the arm. “I haven’t the stamina of you young bloods anymore. I’ll bid you good night, milord. Gentlemen. Emma will ensure that Grafton sees to your wishes. Do forgive my atrocious manners.”

“Yes, yes, of course you will. Goodnight, Emma. Mind you don’t go needling, Lord Darleston. She can be quite the prickly philosopher, but you mustn’t take her too much to heart.”

No, she oughtn’t to be taken at all seriously. Emma enfolded her fists around the fabric of her skirts, whilst she maintained a well practiced smile. Silly old fool didn’t believe her capable of a single eloquent thought. And he really ought to have considered the fact his guests would go late to their beds before inviting them. Now she and Lyle would have to play host and hostess, wherever Lyle happened to be.

Her father leaned towards her, meaning, she realised, to press a kiss to her cheek, but when Emma stiffened all the way from her toes to her lips, he straightened at once. “Well, goodnight dear.” He hurried away, yawning into his teacup.

“I’m sorry. He never does stay up past ten o’clock,” she apologised to Lord Darleston.

“No matter,” Darleston’s soft drawl coiled around her pleasure centres. It was quite wrong that a man’s voice could make one feel quite so tremulous in that regard.

“He does you a disservice, I think.”

“What!” Her throat grew tight all around the neckline of her gown, and another blush began crawling across her skin. It was curse of being fair. “He says only what he believes to be true.” That because she rebuked any form of physical contact that she was wholly flawed and simple of mind. The fact that she had run his household from the age of fourteen had quite entirely passed him by.

“And do you believe I should disregard your chatter as nonsense? Do you often speak thus, Mrs—”

“Langley,” she supplied, growing hotter still. “And no milord, I do not. Although you are at liberty to reach your own conclusion about whether what I spout is atrocious twaddle.”

Darleston gave a deep throaty laugh that rolled like a purr and sent sparks of heat flowing through her breasts. He was quite the most… No, it was wrong to think like that and positively discourteous to her husband. Not that they had a conventional relationship. Oh, to hell with it. If she couldn’t be honest in her own thoughts, then she would never hear any truth. Darleston was beautiful. Not in a dandified fashionable sort of way, but in a beastly way. Something about him yanked at her like there were a knot tied in the centre of her chest and someone kept tugging on the other end.

Emma focussed on a point mid-way down his chest. She dared not glance any lower, nor look up into his face for too long for fear that he recognised the heat in her gaze. She’d seen other women look at men in this way, but she’d never done so herself. Looking led to touching and touching was something she could never do.

“How is it you happen to be with us?” she asked, eyes downcast, as she retreated into the safety of an armchair.

Darleston leaned against the mantle. “I did intend to stay elsewhere, alas that didn’t work out. He had…other plans.” Darleston’s thin expressive lips quirked upwards but failed to form a smile. “However, as your father had already kindly extended an invitation, and I was already quite nearby…”

“I’ve scarcely seen more than a passing glance. I understand you have 120 or so acres, but I’m sure I’ll find it charming, much as I find the lady of the house.”

Butterflies fanned the flames in her chest. It was an easy compliment for him to bestow, but not one she heard very often. Most people gave her a wide berth, just as wide as the one she gave them. Few sought her acquaintance or pleasure, preferring Amelia’s vivaciousness. “Strictly speaking that would be my sister, not I.”

He turned his head with her to spy her sister out. Amelia sat at the centre of a ring of gentlemen upon a tapestry-covered pouffe. The week was clearly to be one rife with trouble.

Posted by Madelynne Ellis at 10:23 am No comments: