I wish I knew what was going on, but frankly I don't. It seems that A Gentleman's Wager has been re-released in the UK (this is good since it was out of print) with the original 2003 cover (left) rather than the 2008 cover (below) which would make more sense. Guess Ebury who acquired Virgin's back catalogue have decided to put out some of those books. I thought I'd seen a projected release date of October, but hey, July is fine too. Anyway, it means it's available again, at least in the UK. Amazon link here. 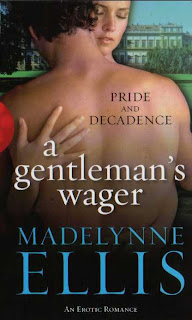 Posted by Madelynne Ellis at 7:47 pm