Enticement, my contemporary menage novel set in the sleepy village of Kirkley, Yorkshire is officially released in print today. Wheeee! Release days always put an extra bounce in my step. Hopefully enjoying the hot sexiness contained within its pages will do the same for any readers. 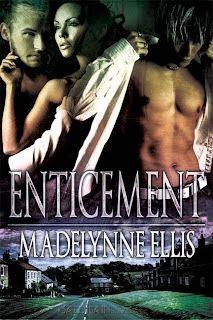 Here's the blurb to remind you what it's all about.

Once trouble moves in, it can throw a kink in your plans.


And here's some buy links from where you can purchase its goodness.
http://store.samhainpublishing.com/enticement-p-6539.html

You can also read the first chapter here.

Prizes too! I can't have a release day without prizes. So, I'm giving away ebook copies of Enticement and Three Times the Scandal to which ever lucky person gets drawn out of the hat. Leave a comment to enter.

Also, if you like Kit, you might like to check out his first appearance in the short-story Woe in Kabukicho.
Posted by Madelynne Ellis at 1:13 pm

Congratulations on your print release. The blurb sure grabbed my interest.

Congrats on your release of Enticement! I loved the excerpts!! Can't wait to read the whole story!!

I've had this wishlisted so pick me, pick me!