I've been sitting on this cover for a few weeks waiting until I had the text edits back before announcing the release. Finally, after several years in the making, I'll be releasing Blood Moon (aka the Bloody Book) in early January 2012.

Here's the extremely gorgeous cover, which is so perfect that I can't recommend or thank Kim Killion of HotDamn Designs nearly enough.She was a dream to work with, and produced my favourite book cover (of my books) ever. Everything about it is perfect, from the backdrop to the representations of the characters. 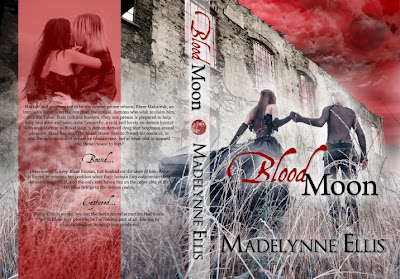 Marked and prophesized to be the demon prince reborn, Blaze Makaresh, an impulsive loner, is on the run from the youkai, demons who wish to claim him, and the Talon, their ruthless hunters. Only one person is prepared to help keep him alive and sane--Asha Lemarche, a cold and lovely ex-demon hunter with an addition to Blood Rain, a demon derived drug that heightens sexual pleasure. Blaze has until the Blood Moon rises to thwart his enemies, or risk the subjugation of the entire human race, but at what cost to himself and those closest to him?


Determined to keep Blaze human, but hooked on the taste of him, Asha is forced to reasses her position when their human foes outnumber their demons ones tenfold and the only safe haven lies on the other side of the Division Bridge in the demon realm.

Asha's life is on the line, but the fierce sexual attraction that binds her to Blaze may prove to be the riskiest part of all,leading to a transformation none of them predicted.

The last month has been crazy, and that's without going into the details of my non-writing life. If I added those it, I think the polite term would be mental. The impolite term isn't printable. However, sticking to the writing front... crazy, yeah.

Let's see,
All in all, far too much to think about at once. Especially as it means that in the first half of 2012 I can currently look forward to
What have the rest of you planned for next year?

I'm over at Lex Valentine's blog today, where you can comment for a chance to win a copy of Three Times the Scandal as well as books by Lex Valentine and Karenna Colcroft.
Posted by Madelynne Ellis at 8:39 pm No comments: