It's the start of the Hot Summer Nights Erotica Bloghop today. Over 100 erotica authors are participating and giving away prizes. Plus there's a grand prize of a huge ebook basket and a $100 gift card from EdenFantasys.Check out below for my details.


Here on my blog, I'm celebrating by offering a copy of my recent novella, published by Ai Press. Leave a comment below. Capturing Cora, is the first story in my Romps & Rakehells series. This series of novellas explores the relationships and illcit goings on at a Regency Summer House Party. Capturing Cora introduces many of the guests that will be cropping up in later stories, as well as telling the story of Miss Cora Reeve and Mr Branwell Locke who have known one another since childhood, but have recently realised their feelings for one another run much deeper than that. 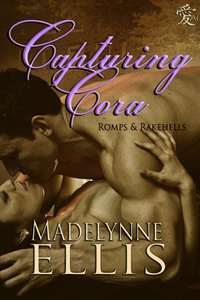 Branwell “Tinker” Locke believes in grand gestures. However, when his marriage proposal to Miss Cora Reeve is dismissed as a jape, Bran has to find another way to persuade Cora of his utmost sincerity. Even if it means using his tongue for something other than pretty words.

Cora fears that her former childhood friend is simply set upon helping her win a wager, that is, until they’re thrust together during a game of hide and seek and previously un-expressed passion blooms between them. Then, Cora is left wondering if she’s made a terrible mistake. Does Bran really love her, or was that forbidden pleasure between them in the cupboard just a moment that’s gone forever?


Don't forget to look out for books two and three in the series, Menage After Midnight and Taming Taylor, both of which are due out soon.


Visit each stop on the bloghop for chances to win a different individual prize as well as be entered to win one of the grand prizes:

The charming and lovely, Kat Black has tagged me in the Lucky Seven Meme.

The 'rules' are: Go to page 7 or 77 of your latest work. Read down to the seventh line and then post online the next seven lines or sentences. Then head off and tag seven more writers.

Here's my little offering from my untitled work in progress.

Bryn was only a few steps away. He wouldn’t even need to use his tongue. If he came within a metre of her she’d die a thousand little deaths, all of them shameful and marvellous. Even stood watching him, her brain still clicked onto the fantasy channel. In her head, she took the few awkward steps necessary to bring her into the living room. Bryn immediately opened his eyes. He didn’t say a word when he saw her. She took that as her cue to go to him. Charlie got down on her knees, and managed to mouth, ‘please’ before she popped him in her mouth.


And here are my chosen victims (should they wish to play): Sedonia Guillone, Portia da Costa, Tabatha Thorne, Erastes, Saskia Walker, KD Grace, and Janine Ashbless.
Posted by Madelynne Ellis at 11:40 am 1 comment:

I'm rather fond of both this cover and this story, which is about a married couple inviting someone else into their lives. I'm especially pleased with the portrayal of "Adam" on the cover. Sharing Adam was released yesterday by Total E Bound. Here, (below) a day later than promised (my brand new laptop is fried!), is a teaser from the story. Enjoy. 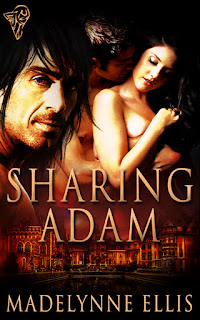 
Despite the risk to their marriage, Becca persuades Elliot to arrange such a tryst with Adam. Seeing them make out may well be the hottest thing ever, but what happens when Adam discovers her and invites her to join in? Can Becca truly share her husband with another man? Is Elliot prepared to share his wife? Are either of them really prepared to share Adam?

Becca had once seen lightning strike. The bolt had hit the pavement right in front of her feet and dispersed into the earth, its passage unremarked upon save in the fraying of her nerves and the knowledge that she'd just escaped a life-altering event.

She'd never hoped to survive it, let alone expected to face the same situation twice. But then she'd never expected to find her husband pinned in the shadows by a raven-haired vixen.

Their friends' wedding had passed unremarkably, as most did after the vows were said and the drinks began to flow, until that moment when she left the ladies and glimpsed Elliot a few feet away, embracing somebody else. He wasn't even being particularly circumspect about it, given that a deep alcove lay to his rear and yet he stood under the light adjacent to the cloakroom door.

Becca braced herself behind a marble column, terrified of being seen, though she wasn't in the wrong. What had possessed him? She risked another glimpse.

As the breath squeezed from her lungs and culminated in a cough, Elliot made a half-hearted attempt to peel the pale hand off his arse.

"Not cool, dude," he chastised, giving Becca her first hint that she wasn't dealing with what she'd originally thought. "My wife-"

"Can't give you what I can give you." The deep rumbling purr confirmed it. Not a vixen, but a viper. One of the ushers-a man she recognised from the overly zealous exchange he'd shared with Elliot on the way into the reception. Maybe that ought to have set off alarm bells, but folks met up at weddings who hadn't seen one another in years. Emotions tended to run a little high, and Elliot's response, a firm pat on the back, hadn't given her cause for concern.

The guy released his grip on Elliot's iron-like buns, only to make a grab for the ridge of his cock beneath his trouser fly.

"Bet she doesn't even know how you swing. Probably be horrified to know how much a little rear-door action turns you on."

Damn, if that wasn't a truth that hurt more than this little tableaux. Not the last part-she knew Elliot well enough to know he enjoyed a little exploration in that region-but the not knowing that his interests ran to other men. That was a little hard to swallow.

"Who said it does, any more?" Elliot said. The slight bristle to his words and the stiffening of his shoulders made no impression upon his pursuer.

"Your cock dancing about behind your fly desperate to get out says so."

She didn't need to see the ridge of Elliot's erection to know that it was true. The guy's large hand spanned the whole length of Elliot's imprisoned cock, while the curve of his index finger and thumb provided an extra pinch of encouragement. A softness infused Elliot's gaze, coupled with a slackness of his jaw that spoke of intense delight.

How could they have been married five years without her knowing this sort of detail about him? Oh, if she thought hard on it, she supposed there'd been hints. Little things about the way Elliot was and how he behaved with other men, and the stray glances he cast. The way he always knew when she was looking at other men and could debate their merits, but had never seemed to admire women in the same way.
Posted by Madelynne Ellis at 1:14 pm No comments:

It's half term at the moment so I'm lagging on the writing front even more than usual. However, I do have a couple of projects that I'm slowly getting underway. The first is another visit to Liddell Island, 6 months after the events of Anything But Vanilla. It'll include Kara, Ric and Zach as well as Kara's brother, and Ric's cousin, and another new character or two.

The second project is set at a university homecoming weekend, and I guess, is about second chances.

Okay, other news. I'm extremely pleased to learn that I've finaled in the Historical category of the Passionate Plumes with Three Times the Scandal. Fingers crossed for the overall results which are announced at the Romance Writers of America conference. Secondly, I have another book out tomorrow. Yep, that one has sneaked up on me. I'll be posting a little teaser from Sharing Adam tomorrow.
Posted by Madelynne Ellis at 8:34 pm No comments: