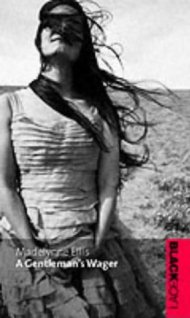 I'm really excited today, because finally A Gentleman's Wager is available in e-format. I didn't think it was ever going to happen, but it has, and as you can see from the pic alongside, with it's original cover (I've no idea why).

I'm not sure what the situation is, but currently it's available on Amazon.co.uk and other UK sites. Hopefully, it'll be available worldwide soon.

So, to celebrate. Stop by (you can leave a comment here or email me at madelynne at madelynne-ellis dot com) and let me know what it is you love about A Gentleman's Wager, or any of the other books in my Georgian Rakehells series, and what you're hoping for in the future books in the series. I'll draw a random winner to win a book from my backlist.

On the subject of future books. I have the contract for AGW (Georgian Rakehells) #5 sitting on my desktop at this very moment. The title is Her Husband's Lover, and it'll be published May 2013 by Mischief, HarperCollins. Look forward to 100,000 words of  Lord Darleston getting himself into trouble when he's reunited with his first lover and the man's wife.

Addendum: Forgot to say that Three Times the Scandal (AGW #4) won third place in the Historical Category of the Passionate Plume.
Posted by Madelynne Ellis at 8:51 am