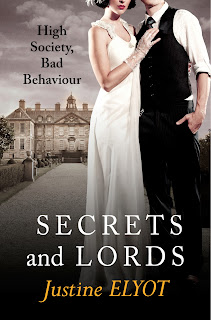 I'm delighted to welcome a fantastic writer and fellow Mischief author, Justine Elyot to my blog today. Justine is the author of so many books I've lost count, but her most recent release, Secrets & Lords is her first foray into the historical genre. I'm already part way through reading it, and I'm thoroughly enjoying its Downton Abbey-esque setting.

Take it away, Justine...


I'm really honoured and thrilled to be here as Madelynne's guest on the occasion of publishing my first historical book, as she writes some of the best historical erotica there is. I'm pinching myself!

Secrets And Lords is set in 1920 – so not quite the Jazz Age yet, but it's in the post. The war ended two years earlier but it casts a long shadow over my characters, some of whom want to gloss over it with wild excess whilst others are too haunted to let that happen. Lord Deverell wants country house life to carry on as if nothing had ever interfered with it, but it's pretty clear that isn't going to be possible – especially given his choice of second wife.

The summer of 1920 brings illicit liaisons to stately home Deverell Hall. Lords, ladies, butler and maids all succumb to the spirit of the roaring 1920s as sex and scandal take over.

Lord Deverell's new wife has the house in thrall to her theatrical glamour. His womanising son, Sir Charles, has his eye on anything female that moves while his beautiful daughter, Mary, is feeling more than a little restless. And why does his younger son, Sir Thomas, spend so much time in the company of the second footman?

Into this simmering tension comes new parlour maid, Edie, with a secret of her own – a secret that could blow the Deverell family dynamic to smithereens.

And a short excerpt to give you a flavour:

He scarcely needed to do anything to make her want him, she thought. The merest touch made her flood with desire for more. She was like a magnet, helplessly driven to connect with him. Opposites attract.

She almost forgot about the French letter until he knelt up and retrieved one from the bedside table. How could she be so stupid? Did love make one lose one's mind? It certainly seemed that way.

When he drove into her she cried out with pleasure. The feeling of having him inside her was enough to override entirely any residual pain. She spread herself wide for him and pushed her bottom up to meet his plunging length. They were one being, fused together at their roots, belonging that way.

They rocked back and forth, slowly at first, Charles taking care to stoke the fire he had laid with even strokes. Edie clung to his neck, covering his face with kisses and allowing him to cover hers in return. The languid pace allowed her to feel the stretching of her inner walls and enjoy the continuing work of his fingers on her bud. Step by step, she climbed towards her peak, but she wanted it to last forever, to lie there underneath Charles, made breathless by his weight on her, warm and wanted and loved, until everything went dark.

She tried to hold out but his fingers wouldn't allow it and she soon felt the quiver of approaching climax. Now there was nothing she could do to stop it so she let it take her. Charles thrust deeper and harder – he must know – and she clasped her legs tight around him, ready for the moment.

It spilled out of her, in her voice, in the spasms of her muscles, in the trembling of her limbs, in so many ways. He kissed her through it and kept up his rapid pistoning until he was able to join her.

It was almost as good as her own throes of ecstasy to watch him in his. How astonished he looked, as if he had not expected to feel this, and how touchingly alarmed. She laid his head on her breast afterwards and unplastered the hairs from his damp skin.

She felt too much for him. Without knowing quite how, she had waded into dangerous waters. But there was nothing she could do about it except try to keep afloat.

Posted by Madelynne Ellis at 7:00 am No comments: