I'm please to see a second of my Mischief titles has been translated into Italian as part of the Romanzi Hot Secrets line. 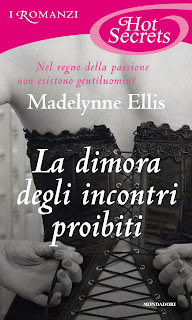 Currently available at Amazon.co.uk  | Amazon.it
Posted by Madelynne Ellis at 2:01 pm No comments:

Looking for a Halloween Read? 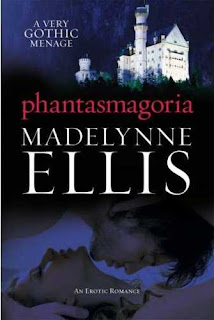 The cellar was dark, and if not dank then certainly musty. Bella couldn’t believe it normally smelled so ensanguined; the metallic taste seeped into her mouth, causing a thickness in her throat.

A cowled figure beckoned them into the unknown from the bottom of the steps. Niamh clung to her arm, already trembling. Beyond the wine cellar, the rooms were lit with a sickly green glow, giving the illusion that they were at the bottom of some murky pool. Cobwebs and tattered linens shrouded barrels and caskets, and a notched scythe stood propped by the door.

Tremulously, they followed their silent guide into a vaulted chamber, where four more robed figures formed an arch around a gaping black hole in the brickwork. The guests huddled together behind them, ladies clinging to their escorts’ arms, and the gentlemen all standing to rigid attention, the only indication of their fear their consciously slow breathing as they waited, ears straining, in fearful anticipation.

Read more »
Posted by Madelynne Ellis at 10:46 am No comments:

Sneak Peek: What Ginny did...

With the boys from Black Halo, while Dani and Xane were off together.


‘If you must,’ Ash replied, hardly paying him attention.

Not quite sure if she was included in this escape plan, Ginny watched the guys collect assorted jackets and trinkets from around the room.

‘If we end up in A&E I’m holding you personally responsible,’ Spook muttered to Ash, as he fell into line behind Rock Giant. ‘Last time he drove the bus, we ended up doing a 360 degree roll down an embankment, and I swore I was never getting into another moving vehicle if he was controlling it.’

Abject horror filled Spook’s handsome face. He shook his head. ‘No way. You lot drive on the wrong side of the road.’

‘The left is the right side of the road,’ Rock Giant griped.

‘Yeah, how’d you figure that out? It doesn’t even make sense.’

Rock Giant proceeded to careen around the furniture, over egging his performance with brake screeching sound effects. ‘I’ll go get the van keys off Ulf.’

‘Dear God,’ Spook sighed with his head down.

‘It’s OK baby, I’ll protect you.’ Ash draped an arm around his shoulder and squeezed.

Spook shook him off. ‘Lay off the soppy stuff. I’m not here to provide you with post-coital cuddles. You’re supposed to do that with the girl.’ He headed towards the exit with his long white-blond hair falling around his shoulders and his purple guitar slung across his back. ‘I am so glad I insured my fingers. At least I can live off the proceeds after he mangles us.’

‘It’s atrocious. Let’s pray there aren’t any corners between here and the hotel.’ He extended his hand towards her. ‘Are you prepared to chance it?’


Posted by Madelynne Ellis at 9:45 am No comments: 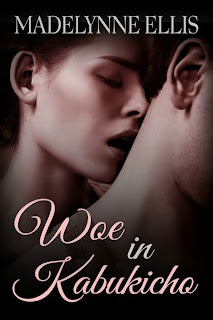 I'm celebrating the gorgeous new cover for Woe in Kabukicho, by making it FREE until Thursday. This short story is a prelude to the novel Enticement, featuring the gorgeous Kit, or Sky as he's known when he's working ;) Check it out at Amazon.

She never sought a connection... but a chance encounter with a beautiful stranger in Tokyo's pleasure ward grants her one heartfelt desire.

Download for free at  Amazon.com  |  Amazon.co.uk
Posted by Madelynne Ellis at 12:39 pm No comments: