The last few weeks have been filled with appointments, which generally results in less writing being done. Therefore, I'm rather pleased with myself, because I've managed to stay pretty much on target. Of course, that still means I've oodles to do and not enough time to do it. I wish I was one of those writers capable of producing a book a month, but I'm not, so I'll just have to plod along at the pace I can manage.

2014 is shaping up to be extremely busy. It currently looks something like this:

All Night Long (Ash & Ginny #1) , which takes place at the same time as the start of Come Undone and explores what Ginny got up to with the other members of Black Halo, while Xane was seducing Dani. It's a lot of fun, and I'm enjoying playing with these characters and learning all their quirks. It's due to the publisher in January.

Come Together (Rock Hard #2) the second part of Dani and Xane's story, is next in line. The deadline is likely to be around Easter time. I'm already work on this concurrently with All Night Long, since the two story feature many of the same characters. Black Halo are going on tour. (Hope that's not too much of a spoiler.)

Then heading into the second half of the year, I'll be working on All Fired Up, Ash & Ginny's second outing; delving into the AGW3,  and working on Foursome completed for November. That amounts to rather a lot of word to produce at my rather slow pace. Oh, and there's the Ghosts of Christmas Past, in time for next December, as I know it's not going to be complete for this one. The latter is about Lucerne, reflecting on his past relationships. It's a little melancholy given where he is at the moment, but I'm looking forward to focusing on it at some point, rather than adding to it in drib drabs. It should get me nicely in the mood for working on AGW3.
Posted by Madelynne Ellis at 7:55 pm No comments: 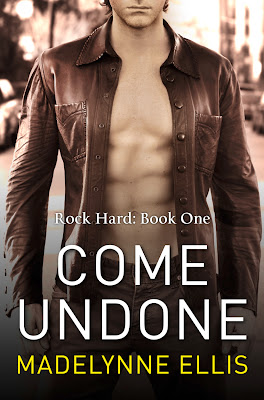 Come Undone is currently on special offer at Amazon UK and GooglePlay, so now's a great time to check out sexy vocalist Xane Geist as he tries to hang on to his heart and some clothing.

Also, I've just heard that the next two books featuring Black Halo, one about Xane, and one about Ash Gore will be available early next year.